A board game where players start as a normal person and by the end of the game have levelled up to a full on superhero through tackling crime and villains.

I keep additional super rough notes on this project here.

Added some notes around experience and upgrades

Has a full Friday off so I could get some admin done and then tuck into this. Mainly spent the time going through the notes and changes from last time and had a mini play through of the first few stages trying to write a comprehensive list of what I should do next.

Top note from this session: What if there is always a villain on the board. When that villain is defeated the villain card tells you which one to draw next. Until eventually one of them says when you will win the game. (should probably have a 1/5, 2/5, 3/5) on there so people know their progress.

Here's all the actions I want to do next: 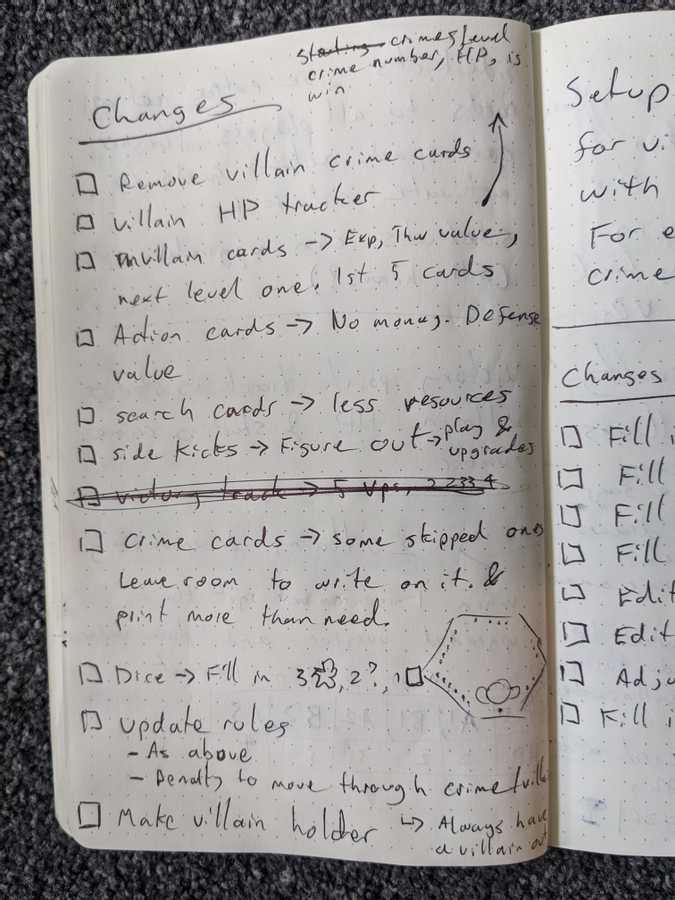 There's many more notes in my sketchbook.

Had a really good play test/development session with another programmer friend of mine. So we went very deep into mechanics and balance. Highlights include: 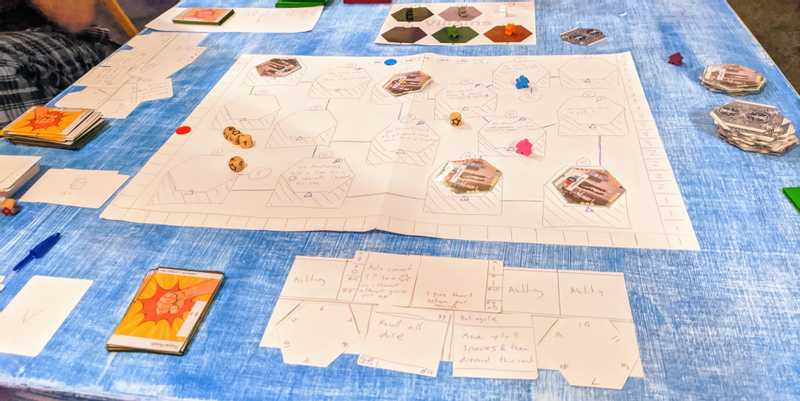 Started building out a basic paper version from the latest rules. Writing cards as I go so I can iterate more quickly and play test more. Need to be careful not to let number of cards or complexity get to out of hand. Can easily see how I'll make too many.

Spent some time trying to streamline the upgrade process, both in terms of abilities and gadgets. Ended up creating a little player sheet to help with this.

The current idea is that upgrade cards have numbers on them so they can be looked up when you upgrade. e.g. Your starting vigilante card would say you could upgrade to card 2, 3, 4 or 5. In the tray that holds these numbered upgrade cards there's a few for each number, which are the same card but with very small differences e.g. probably the upgrade paths are different. To give more variety and flavour to games. Both gadgets and abilities can be upgraded so these cards will all work in the same numbering "lookup" system. 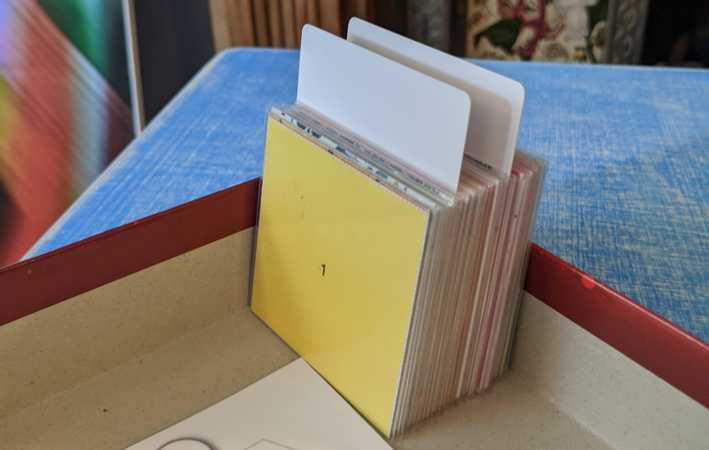 The original player sheet design had a space in the middle for holding "experience dice" to keep track of how much experience you have. This next design ditches that in favour of "tracking" or "count" cards. 2 hex cards that have numbered sides (both on front and back) and be used to keep count by rotating. Similar to how you rotate crimes. Keeping this same rotating mechanic reduces the amount of unique systems. But does restrict each card to only count from 0-11 (accounting for 12 sides when flipped). The 2 spaces in this image are for keeping track of experience (which you can spend on upgrading abilities) and resources (which you can spend to upgrade gadgets). Balancing these 2 aspects results in nice symmetry on the player sheet and makes the upgrade process for both abilities and gadgets the same.

Also reduced the number of abilities and gadgets you can have from 6 abilities to 4 and 4 gadgets to 2. Otherwise there's so much going on and it would take ages to upgrade everything. Also it encourages players to generalise rather than specialise. ANd I think specialising would lead to more entertaining game play. 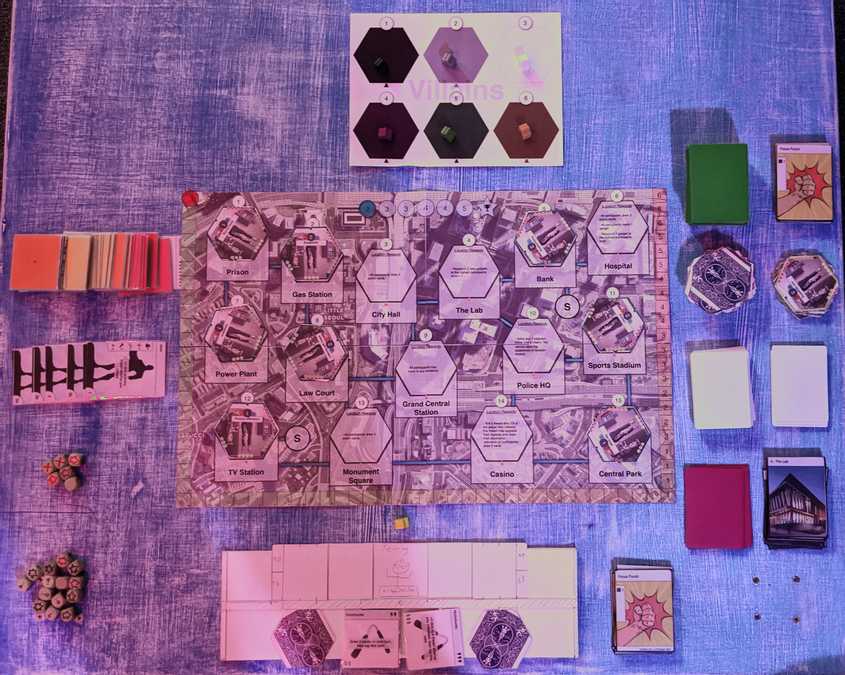 Also did a lots of work in the v0.6.0 version of the rules. Here's some highlights:

Didn't do that much in this time but did update the rules for simultaneous play, figured out a bunch of search cards and tweaked some card values in the spreadsheet. Here's some of the ideas for search cards:

Started trying out some of the ideas from the last play test session. Primarily how to make it work so all the vigilantes take their actions before the villain phase. Here's the new notes: 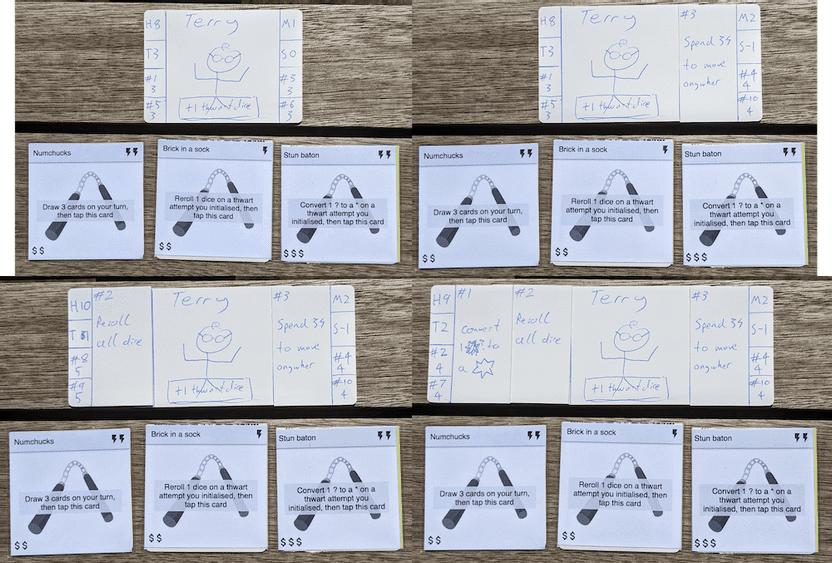 Had a good 2 person play test with the newly printed versions. Here's the notes:

Worked on getting a fully printed version based off the data in Google Sheets so I can more easily keep track of the changes and have a nicer version to play test.

Implemented the idea of having action dice. This didn't work. It was more fun to have action cards that could only be spent once but could do multiple things, rather than dice which only shows 1 kind of action, or you can change to anything. It's also easier to wrap more theme into cards.

Played with another version with the following changes: 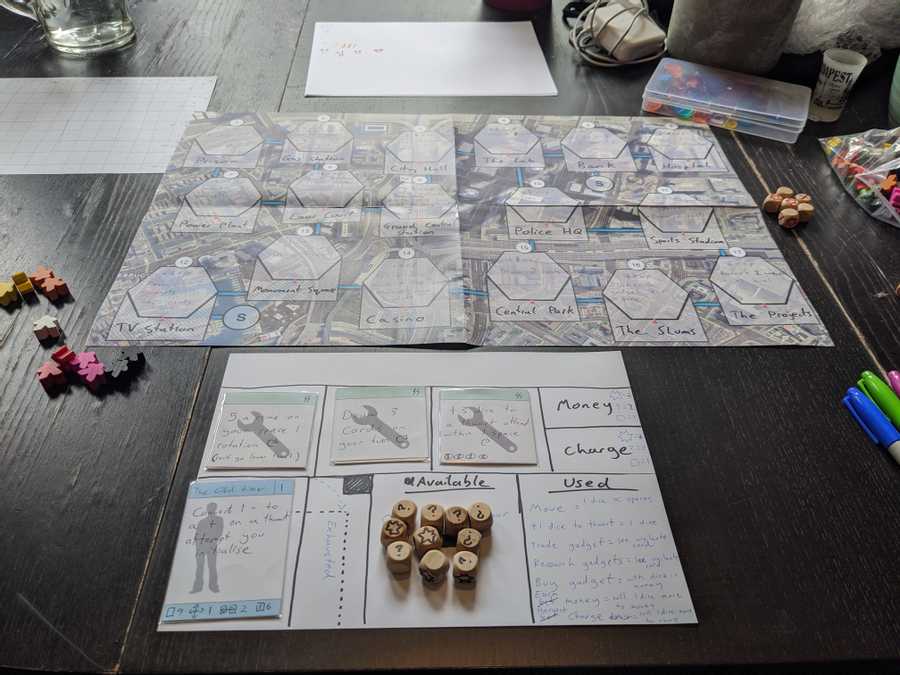 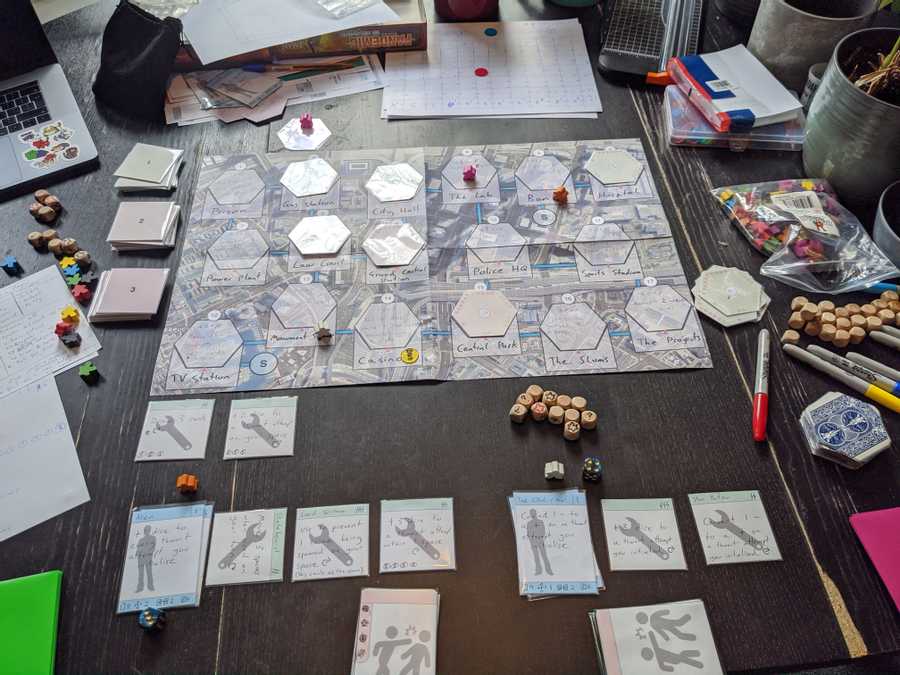 Played around with some ideas about removing the action cards and replacing them with tokens or dice. Seeing as the cards were only used to make you think about what actions to take and determine available actions, it seems like there's a simpler and tidier way by using tokens or rolling dice to determine this.

The current idea is that you start the game with x amount of action dice per player. At the end of your turn these move to the unused pool. You can spend them (by moving into the used pool) in the following ways:

The dice would be coloured per player so when you contribute dice to a thwart attempt and a single player rolls you know whose dice is whose. This then allows us to reward players with more dice as rewards or upgrades. You would also now have more control over the actions you can take, as you can take any combination of move/thwart/trade/resource generation rather than drawing a random mix from the action cards.

Built a new version with hex crimes and a lot of the changes from the last update. Had a play test of this version which went really well. Here's some of the notes from it:

From this we've got a few new ideas to play with: 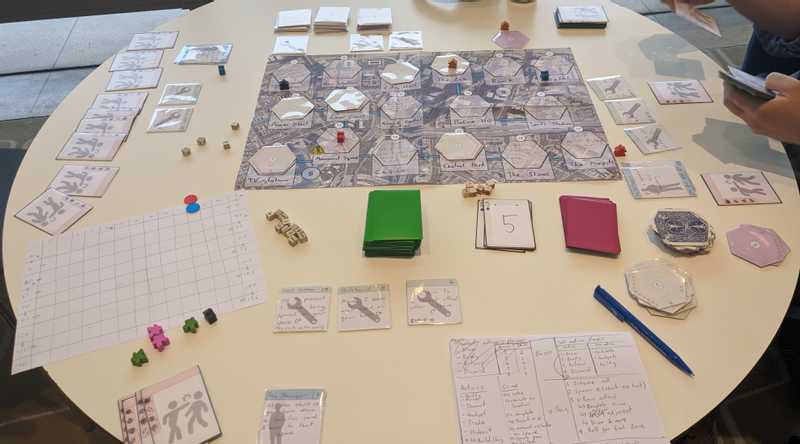 This week I was looking at simplification, self balancing and player interaction. So have been testing the following ideas:

Here I've been trying to figure out how to make the spread of gadgets/abilities more balanced and personal, so players feel like they can become the hero they want, and don't get stuck with effects they don't enjoy. So here's some ideas I've been playing with:

I've also been looking at core mechanics as well such as:

During this time I was working towards building a version that could actually be play tested with people. Here's a summary of the game at the end of this period:

Zero to Hero is a co-op game of building your character from a normal person to a fully fledged super hero. By battling harder crimes and villains you can level up your gadgets and abilities to create the hero you want. The game creates a randomised city for you each time you play and crimes will keep getting spawned and get closer towards being successful. Each player uses action cards to move around the board, upgrade gadgets/abilities and increase their chances of thwarting crime. The heroes are successful when they have successfully defeated 3 villains. They lose when the Threat level has increased too much (this happens when crimes succeed and villains get an action).

I managed to have a few play testable version of this and had a great session at a play test meetup. 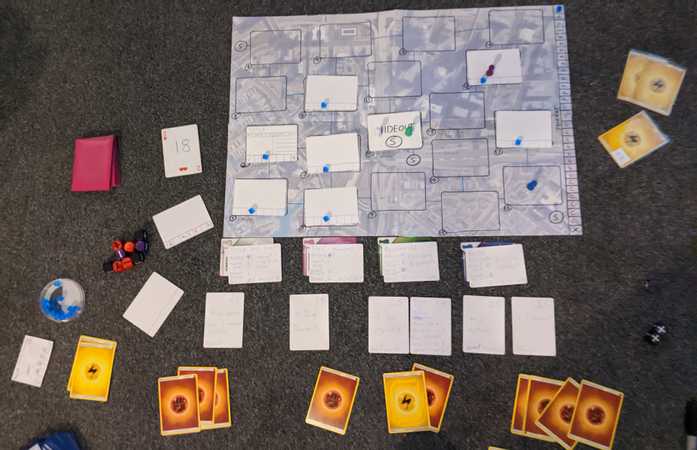 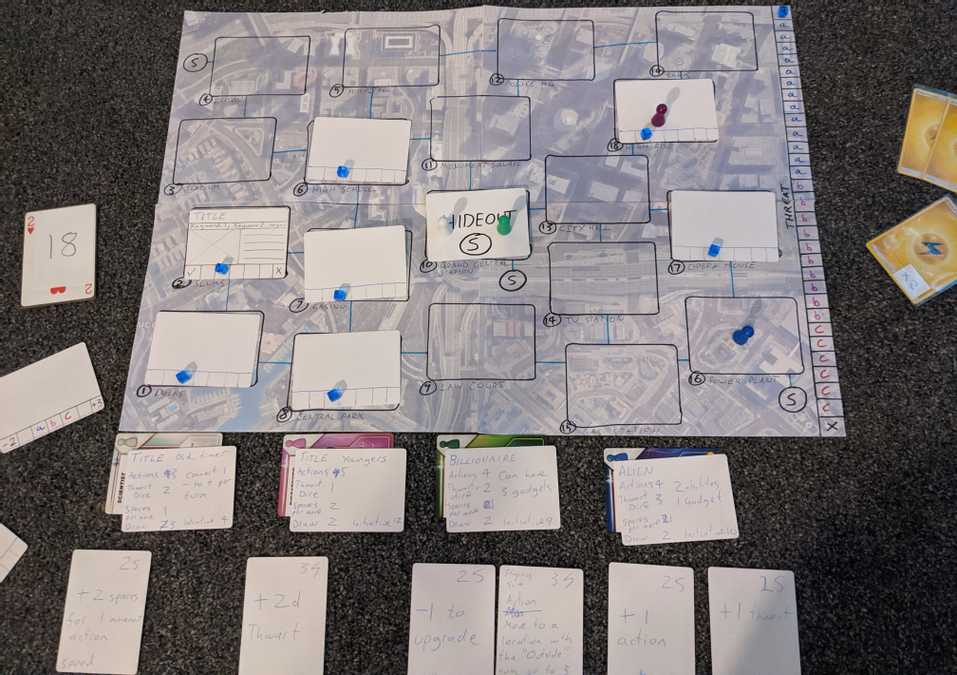 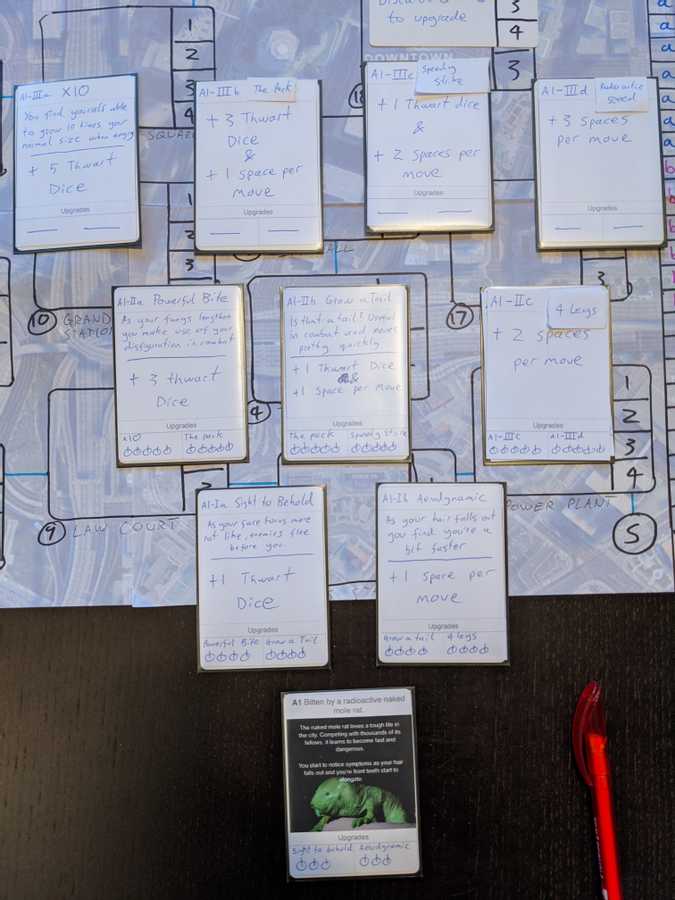